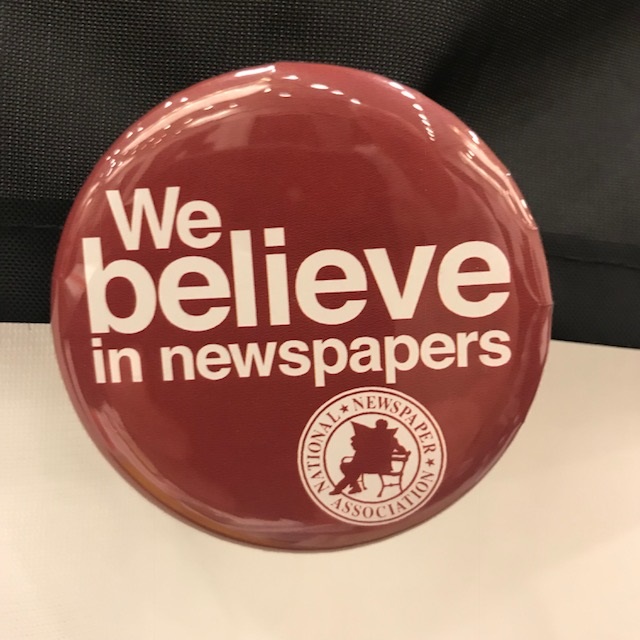 Newsprint is one of the grades of paper in a category called Uncoated Groundwood paper or UGW.

Most of the newsprint used in U.S. newspapers is manufactured in Canada and has been for many years. U.S. publishing businesses were instrumental in encouraging the development of the Canadian newsprint market because of the natural advantages of hydropower and water-lane shipping in that country. At some points in U.S. history, American publishing companies like The Washington Post and The New York Times even owned all or parts of newsprint companies so that they could insure continued supplies in tight times, such as during the World Wars.

Newsprint production also occurs in the U.S., primarily in the Southern states and upper Northwest, using wood products from farmed conifers, like pine trees. These products are usually chips from logs that have been sawn for construction lumber.

Many newsprint mills in both countries either closed or converted to other paper products in the past decade as U.S. newspaper publishers cut demand. In fact, the U.S. requires 75 percent less newsprint today than it did a decade ago.

The tariffs against all UGW were proposed by a Washington State newsprint producer, North Pacific Paper Company or NORPAC. NORPAC said Canadian producers were violating trade laws in two ways. First, they were allegedly receiving government subsidies through such channels as government loan assistance and permission to harvest trees on government land. Second, they were selling paper in the U.S. too cheaply compared to prices for other nations. NORPAC said its paper mill was injured by these practices.

The U.S. Department of Commerce and the International Trade Commission are investigating these claims. Preliminary duties against Canadian producers began in January in the range of about 6.5 percent to nearly 10 percent for the alleged subsidy violations. Another set of duties began in March with a high assessment of 22 percent for alleged underpricing or “dumping.” The preliminary findings are not unusual and do not mean that the final determinations will end with such major assessments. The U.S. trade laws are engineered to give the benefit of the doubt to U.S. producers, even at the cost of higher prices to consumers. Preliminary findings can be intended to provide some interim relief even before final facts are all in.

These tariffs are being collected now at the U.S./Canadian border, however, and are in escrow until final findings are complete. Newsprint producers are already escalating their prices to U.S. newspapers. The harm to newspapers has already begun.

The respondent Canadian companies say that U.S. publishers’ demands have fallen as parts of the newspaper industry have shifted to digital publication. Major U.S. daily newspapers have cut back, merged, closed or dropped publication days as digital commerce and competition have driven reductions in advertising and print readership. Market forces, not trade practice, are responsible for the harm to paper producers.

For community (weekly and small daily newspapers, primarily in small towns), the demand for paper has fallen less dramatically as print remains more of a core business. However, these newsprint buyers’ requirements have always been much less than those of dailies because they print less frequently, such as once a week or once a month. A study in the 1990s by the National Newspaper Association indicated weekly newspapers formed only a sliver of what was then a 16 million metric ton domestic newsprint market. Today, the U.S. is about a 4 million ton market. Community newspapers alone cannot create enough demand to stimulate a U.S. newsprint market, even though they have more enduring needs for paper.

Anecdotally, National Newspaper Association members already report occasional shortages in paper supplies because North American paper producers see the writing on the wall and are producing less. Publishers fear the tariffs will accelerate this ramping down for paper producers. But industry sources say U.S. mills are running at 97 percent capacity now. Could the tariffs cause the U.S. newsprint production to expand? Highly unlikely. New mills cost millions of dollars and take years to site and construct in compliance with complex air and water safety laws. Even during the era of rapid recycling collections in the 1990-2000s when the newsprint markets were robust, several individual state governments contemplated funding new newsprint mills to use up rising volumes of collected old newspapers and they were unable to establish a single new mill. In the falling markets of today, investment in new factories is even less feasible.

Digital publication has become common throughout the U.S. Readers sometimes erroneously believe that newsprint is no longer necessary. However, U.S. community newspaper publishers cannot support digital (internet or mobile) versions of their newspapers without a printed newspaper. The hard copy advertising and readership provides more than 90 percent of the revenue that enables the digital newspaper to exist. In other words, without print, there is no online news from the local newspaper.

The Commerce Department may find that U.S. newsprint producers are indeed facing a shrinking market, but that the shrinkage is because internet competition has harmed U.S. publishers’ ability to purchase paper and not because of unfair trade with Canada. If newsprint prices rise dramatically, publishers will be able to purchase even less paper, and U.S. newsprint producers may find an even more difficult market for their products. NNA believes tariffs will cause job losses at U.S. newspapers and in the markets that depend upon them. Tariffs will not help U.S. paper producers. That may be why the industry organization for U.S. paper producers, the American Forest and Paper Association, does not support NORPAC’s case.

Tags: newsprint tariffs
« Back to Blog
"I receive and enjoy the periodic emails you personally send out about single copy promotions."
Mike Sample, Publisher
The Titusville Herald & The Forest Press